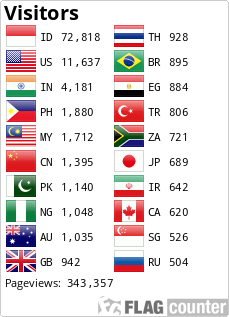 Registration and login are required to submit items online and to check the status of current submissions.

Already have a Username/Password for WARTAZOA. Indonesian Bulletin of Animal and Veterinary Sciences?

Wartazoa, Indonesian Bulletin of Animal and Veterinary Sciences contain: (i) the scientific manuscripts that have not been published previously in any scientific journal, and include a statement of originality by the author, (ii) the scientific review of the latest reviews/research results in the field of animal and veterinary sciences, and (iii). Analysis, assessment of policy and ideas related to veterinary and animal husbandry. This bulletin is published four (4) times a year in March, June, September and December.

8. The decimal, is separated by a comma (,) for Indonesian language and a dot (.) for the english language

9. Literature cited in the text:

Some examples of writing the references as follows:

Hanotte O, Han J. 2006. Genetic characterization of livestock population and its use in conservation decision making. In: J Sannino, Sannino A, editors. The role of biotechnology in exploring and protecting agriculture genetic resources. Rome (Italy): Food and Agriculture Organization of the United Nations; p. 89-96.

Balitvet. 2004. The dynamics of Avian Influenza in Indonesia. Budget Report of the Veterinary Research Institute.

Author(s) are free of charge for manuscript accepted for publication

As part of the submission process, authors are required to check off their submission's compliance with all of the following items, and submissions may be returned to authors that do not adhere to these guidelines.

Authors who publish with this journal agree to the following terms:

All articles published are licensed under a Creative Commons Attribution-NonCommercial-ShareAlike 4.0 International License. This permits anyone to copy, redistribute, remix, transmit, and adapt the work provided the original work and source is appropriately cited.

This work is licensed under a Creative Commons Attribution-NonCommercial-ShareAlike 4.0 International License.

The names and email addresses entered in WARTAZOA will be used exclusively for the stated purposes of this journal and will not be made available for any other purpose or to any other party.